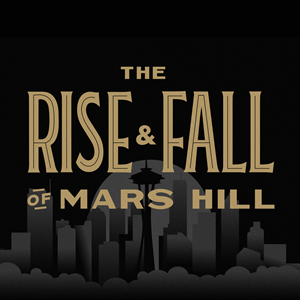 WHEN MARS HILL CHURCH was planted in Seattle in 1996, few would have imagined where it would lead. But in the next 18 years, it would become one of the largest, fastest-growing, and most influential churches in the United States. Controversy plagued the church, though, due in no small part to the lightning-rod personality at its helm: Mark Driscoll. By 2014, the church had grown to 15,000 people in 15 locations. But before the year was over, the church collapsed. On January 1, 2015, Mars Hill was gone… — Mike Cosper

The TIMELINE has been updated.

HOME
• IF YOU DON'T SAY IT'S WRONG THEN THAT SAYS IT'S RIGHT
• "I Break Their Noses"
• BEATING UP CHURCH MEMBERS
• "There is a pile of dead bodies behind the Mars Hill bus..."
• "SHUT UP and do what you're told!"

• MARS HILL 2001-2006 - Core Values, What We Believe
• MARS HILL 2001-2006 - Who We Are FAQs
• MARS HILL Membership Covenant 2001-2006
• BYLAWS prior to 11-01-2007
• ELDERS' Wives Meeting Teaching Notes re: The Testing of Our Faith
• ELDERS' Wives Invitation to Prayer 09-06-2007
• COVER LETTER to Pastor Jamie Munson re: recommended edits to proposed BYLAWS
• Suggested Edits to proposed MH Bylaws
• EMAIL to the Executive Elders after the firing
• EMAIL to the MH Elders after firing
• IMPORTANT Message from the Lead Pastor
• EMAIL from SCOTT THOMAS in response to a Member's questions regarding the firings of Elders
• EMAIL letter to the Elders - DEACON ROB SMITH pleads for a fair and impartial trial
• STATEMENT for 10-15-2007 TRIAL -
• STATEMENT from the Elders posted on MH Members' website, re: Outcome of Trial
• EMAIL from Zach Hubert restoring Paul to “full membership”
• UPDATED Member Communication
• MY CONFESSION and REQUEST for REDRESS of Grievances
• EMAIL EXCHANGE between Brad House and Paul
• RESPONSE email from Mark to email resigning Membership
• RESPONSE email from Jamie to email resigning Membership
• MH MEMBERS' Questions posted on MHC Website in response to "Ask the Elders Anything"
• ELDERS' 142-Page Document in Response to Members' Questions
• MH Church website forum - Jamie Munson "Update on Paul Petry" re: “discipline” = shunning
• MARS HILL MEMBERS publish letter of resignation from Mars Hill Church publicly calling Mark Driscoll and the Elders to repentance
• BENT MEYER'S Letter to the MH Elders, Correcting Exaggerated Communication
• APPEAL letter to Mark for retraction of Shunning & for Reconciliation
• APPEAL letter to Jamie for retraction of Shunning & for Reconciliation
• Jamie’s first response to Paul’s appeal
• Jamie’s second response to Paul’s appeal
• LAST LETTER to Mark, Jamie, and the MH Elders
• MORE Documents in TIMELINE

Embracing Shared Ministry: Power and Status in the Early Church and Why It Matters Today, by Joseph H. Hellerman, Ph.D.
Joyful Exiles: Life in Christ on the Dangerous Edge of Things, by James Houston
Chrysalis:The Hidden Journey in the Transformation of Faith, by Alan Jamieson
The Leadership Paradox: A Challenge to Servant Leadership in a Power Hungry World, by Denny Gunderson
Leading with Love, by Alexander Strauch
Biblical Eldership, by Alexander Strauch
Agape Leadership: Lessons in Spiritual Leadership from the Life of R.C. Chapman, by Robert L. Peterson & Alexander Strauch
“Authoritarianism in the Church” by Steve Martin
Recovering from Church Abuse, by Len Hjalmarson
CHURCH EXITERS, Barb Orlowski, D.Min.
Spiritual Abuse Recovery, by Barb Orlowski, D.Min.
Broken Hearts-Shattered Trust, by Dr. John K. Setser
UNDER MUCH GRACE - What Do You Risk When You Go to a Star Chamber/Hot Seat Meeting?
Pure Provender - Spiritual Abuse Recovery Resources
What Makes Narcissists Tick? Understanding Narcissistic Personality Disorder, by Kathleen Krajco

Question Mark? Why the Church Welcomes Bullies and How to Stop It, by Dr. Jim Henderson

What is Spiritual Abuse? by Dr. Larry Crabb